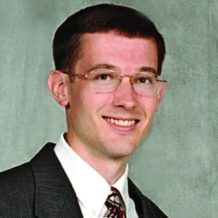 This fund was established by the Seman Family in memory of their son John. It will support the advancement of science and technology education at St. Michael School in Findlay.

John Edward Seman was born in Findlay on December 11, 1977 to David A. and Lisabeth M. (Winkeljohn) Seman. John showed interest in road construction, began identifying road signs, and enjoyed playing with cars at an early age.

John attended St. Michael School and graduated from Findlay High School in 1996, fourth in his class, with dreams of becoming a civil engineer and giving back to his community after college graduation. He graduated with a Bachelor of Science Degree in Civil Engineering With High Distinction in May 2000 from Ohio Northern University.

Upon graduation he became employed by the City of Findlay Engineering Department, and at the time of his death, he was the Assistant City Engineer. John passed away in 2004 at the Cleveland Clinic from complications for treatment of leukemia. John is survived by his parents, Dave and Beth, and his brothers, Steve and Daniel.

John’s educational experiences from grade school through college contributed to his success at such a young age. Those experiences, the connection he felt to many people in Findlay who touched his life, and his love for the City of Findlay were the reasons behind his family establishing an engineering scholarship in his memory, as well as this fund.