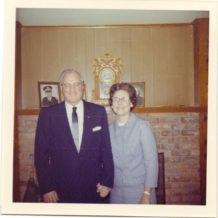 Established 2017 This fund was established by Paul and Ethel's daughter Paulette in memory of her parents. Paul was raised in Akron and was a World War II veteran. While in Akron, Paul was the head of the Civil Justice Association and led the "Jail the Gamblers" crusade in the 1940s to mitigate gang activity. After obtaining his law degree in 1964, Paul and Ethel moved their family to Findlay where Paul took a job with Marathon Oil Company. He was involved in the Chamber of Commerce, the Hancock County Comprehensive Health Planning Committee and the Hancock County Mental Health Clinic. He was also a member of the Findlay and Ohio Bar Associations, the American Legion and a member of St. John's Church. Paul was passionate about education and literacy. Ethel was employed at Firestone in Akron in the 1930s and 40s. She was a talented eggeury artist who attended shows in Texas, Illinois, Indiana, New Jersey and Pennsylvania. She won first prize at a competition in Indianapolis in 1973. After moving to Findlay, she became a regular volunteer at Blanchard Valley Hospital and the Humane Society. To honor each of her parents' passions, Paulette established this family fund which will support both the Findlay-Hancock County Public Library and the Humane Society & SPCA of Hancock County.