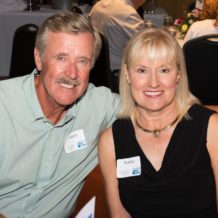 Established in 2009 Garry and Kathleen Peiffer established this fund to support the unrestricted grantmaking of the Community Foundation. A long-time member of the Community Foundation's Finance & Investment Committee, Garry was named to the Board of Trustees in 2009 and also serves as treasurer. Garry is senior vice president of Finance and Commercial Services for Marathon Petroleum Company LLC. He began his career with Marathon in 1974 and was appointed to his current role in 1998. He graduated magna cum laude from Bowling Green State University with a bachelor's degree in accounting and is a certified public accountant. An active member of the community, Garry is a member of the Blanchard Valley Health Foundation's Board of Trustees and Investment & Insurance Committee; the Blanchard Valley Port Authority Board; and the Fifth Third Bank (Northwestern Ohio) Board of Directors.