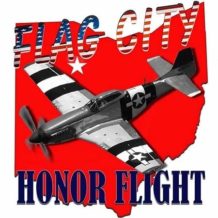 Established in 2010, Flag City Honor Flight is a nonprofit organization whose mission is to honor America's local veterans for their service and sacrifices. Honor Flight transports our heroes to Washington, D.C. to visit and reflect at their memorials. Highest priority is given to the most senior veterans; World War II survivors, along with those other veterans who may be terminally ill.