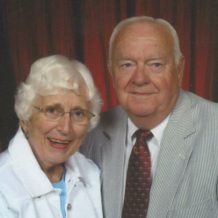 Established in 2006 Donald and Mary (Pat) Sink have enjoyed many wonderful years together in the Findlay community. Donald graduated from Findlay High School and Miami University of Ohio. He joined the military, serving as a pilot in the Air Force from 1943-1945 and fighting in World War II. After working for the Ohio Oil Co., Donald became part owner of Sinks Flowers from 1948-1988. He was honored to serve as president of the Findlay-Hancock County Chamber of Commerce, and he has been a member of Jaycees, Rotary, Experimental aviation association, Elks, American Legion, Findlay-Hancock County Park District, and the Hancock Historical Museum. The Sinks are members of St. andrews United Methodist Church, where Donald served as president of the Board of Trustees. Donald enjoys flying and was a pilot for 62 years. Pat graduated from New Bremen High School and received a degree from Bowling Green State University. Pat worked at the Ohio Oil Co. from 1949-1951 and part time for the Findlay-Hancock County Chamber of Commerce from 1980-1990. She served on the board of the YMCa and the Findlay-Hancock County Public Library. Pat has been active in the arts & Letters literary group, the Blanchard Valley Hospital auxiliary, the YMCA, the Hancock Historical Museum, and the Child Conservation League. She enjoys flying with Don as his co-pilot and navigator. This is the first Charitable Gift Annuity Fund to be established at The Community Foundation.This fund, established with the remainder of their charitable gift annuity, will support our Community's Endowment. Made up of unrestricted and field of interest funds, our Community's Endowment allow the Foundation Board to respond to needs in Hancock County as they arise.